Home/Uncategorized/eBoot Camp makes the front page of the Royal Oak Review – take a look!
Previous Next

ROYAL OAK – After teaching a seminar on how small businesses can utilize the Internet as a marketing tool cheaply and effectively, Royal Oak resident Corey Perlman decided to pen a book on the subject. Perlman, 31, grabbed his laptop and sat himself in the corner of Caribou Coffee in downtown Royal Oak and began writing, “eBoot Camp,” which was originally to be self-published before a publishing company Wiley got a hold of the book.

“I was really geared towards self publishing,” Perlman said. “I was even paying someone a lot of money to design the book.”

A friend of his father’s got the manuscript into Wiley’s hands, and the company offered Perlman a deal.

Originally from Sarasota, Fla., Perlman came to Michigan to be part of General Motors’ e-commerce division. He was teamed up with a group of interns and traveled the country giving Internet seminars to dealerships.

“That’s where I really learned to teach this stuff in layman’s terms,” he said.

After Sept. 11, 2001, and the resulting economic turmoil, the program was halted and Perlman left GM to work for an e-commerce company. He started tailoring his Internet marketing ideas to small businesses, giving presentations for various Downtown Development Authorities and businesses.

“When you hear ‘Internet marketing,’ it has such a scary cloud,” he said. “But as I always joke about, I got a D-minus in my computer science class at Florida State. You don’t have to be a genius to understand this stuff.”

The book explains various aspects of marketing businesses online, including how to have a Web site optimized to be found on search engines and the importance of having a blog along with being on social networking sites like LinkedIn and Facebook.

“We are on the tip of a tidal wave in terms of Internet marketing and social networking,” Perlman said. “It’s not going away. This is only the beginning.”

He said businesses must be willing to put in an hour or two a week to help get more hits on their sites. Those who put in the effort reap the most benefits, Perlman said.

“I think small business owners are the most resilient people out there, and that’s why I’m so confident about this economy, about Michigan’s economy,” he said. “They want to learn and they are willing to put in the work. They just don’t want to spend an arm and a leg to do it.”

The book gives pointers for those working with Web designers so they can understand what is going into the site and not get swindled.

Jaime White had just kicked open the doors to her Pilates and personal training studio in Plymouth in late 2007 when she saw Perlman give a seminar on developing Internet marketing.

“It has helped us tremendously,” she said about the Web presence they’ve developed. “It’s one of the main reasons why we are doing so well.”

She said they get about two new clients a week, and nearly all of them find out about the studio online.

With so many in the metro Detroit area out of work, Perlman said many of the key aspects to Internet marketing can also be applied to someone who is job searching. He said that might just be the subject of an upcoming book.

“One of the first things potential employers do is Google you,” he said. “You want to know what is there for them to find.”

For more information on the book, visit www.ebootcampbook.com.

Caption:Photo byJeremy Carroll Royal Oak resident Corey Perlman has penned a book about how small businesses can use the Internet as a marketing tool. 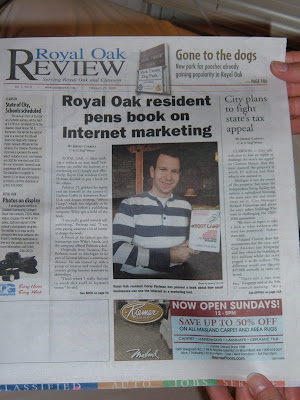