How should you respond to politics on social media?!

Home/Uncategorized/How should you respond to politics on social media?!
Previous Next

How should you respond to politics on social media?! 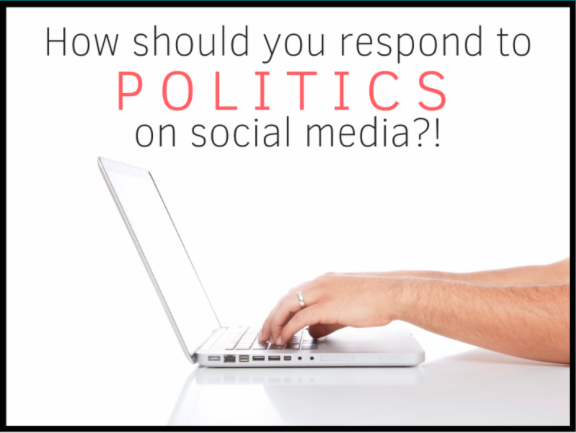 During a speaking engagement this past week, an attendee asked a question about some best practices around engaging and/or responding to political discourse on social media. Yowza – that was a can of worms I was not interested in opening!  That said, I did take on the question and offered some guidance that has been around for over 100 years. I referenced some of Dale Carnegie’s Human Relations Principles, as they are more relevant today than ever before. Here are a few that I mentioned and how they applied to the question.

#1. The obvious one. “The only way to get the best of an argument is to avoid it.” Amen. This probably covers 90% of the cases we encounter on social media. Avoid engaging and step away from the keyboard. Often times, you end up arguing with someone you don’t even know and have no possible way of impacting their perspective. It’s not only a waste of time, it can be toxic to your energy input and output. When in doubt, walk away.
That said, there are instances where you feel the need to respond. If you do, here are a few gems from Dale Carnegie to help:

#2. “Try honestly to see things from the other person’s point of view.” A little empathy can go a long way. If the person you disagree with is a family member or friend, chances are their beliefs and feelings have good intentions. They believe what they believe and that does not make them a bad person. And if you choose to engage in constructive dialogue with them about an issue you disagree with, it’s important to stop and truly try to see things from their perspective. Why do they feel that way? What experiences have they had that you haven’t? Is it possible that there’s some right and some wrong in both of your points of view? If the person receiving your alternative perspective believes you’ve truly given their perspective some thought, they may be more open to hearing what you have to say. Maybe. 🙂

#3. This one is a tie: “Don’t Criticize, condemn or complain” and “Show Respect for the other person’s opinion – never say ‘You’re Wrong.'”

If you’re going to engage, don’t try to win. If you win, then the other person loses. How can you express your perspective and let the other person save face? I always find that this is easier to do when we’ve taken time to allow our emotions to settle. In fact, I had to do this today! Take the time you need to ensure the response is less reactionary and a more thoughtful response.
Here’s a link to six more Dale Carnegie Principles that are critical to effectively communicating in today’s digital world.

Impact Social’s commitment to thoroughly understanding our business has allowed us to take our social media efforts to new heights. This is reflected in the quality of our blog, social media posts and feedback from clients and fans. We saw an immediate hike in fans and followers on facebook and twitter when the Impact Social team took over and have seen a steady increase month-on-month since.
~ Dale Carnegie Training South Florida

We are a company that puts customer service, going the extra step, as what sets us apart from our competition and is the key to our success. Because of that we expect the same level from every company we work with and it has been a pleasure to partner with your company. You have a great team.
~ Chris A. Medical Solutions